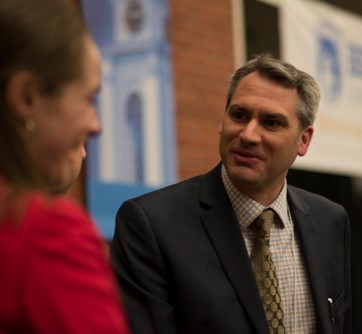 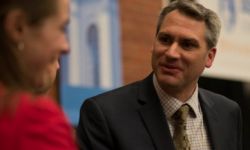 Aaron grew up in Eugene, Oregon, earning his bachelor of science degree with a double major in economics and mathematics from the University of Oregon. Not wanting to give up Fall Saturdays in Autzen Stadium (home of the Oregon Ducks football team), he continued on to graduate school at the University of Oregon, earning his Ph.D. in Economics in 2002. After receiving his Ph.D., he accepted a position in the Economics Department at Bentley University in Waltham, MA. He was promoted in 2009 to Associate Professor of Economics, and in 2014 promoted to Professor. He served as the Director of the Honors Program from 2012 to 2018 and as Associate Director of the Honors Program for a year prior to that. He led the Department of Economics as chair for a year and a half prior to his current position as Associate Dean.

His general interests in both teaching and research revolve around macroeconomics, with a special emphasis on the role of monetary policy. His current research explores the institutional structure of the Federal Reserve, communications strategy, and credibility. Conducive with his interest in monetary policy, Aaron has co-advised Bentley's highly successful Fed Challenge team alongside Dave Gulley, and is currently the Chair of the committee organizing the competition at the Boston Federal Reserve. Aaron teaches intermediate macroeconomic theory and monetary economics courses regularly. He was the primary advisor of one Ph.D. student at Bentley, and has served on the committee of another recently. He has won three Innovation in Teaching awards, as well as the Adamian Award for Teaching Excellence.

His published research includes journal articles in Economic Inquiry, Macroeconomic Dynamics, Applied Economics, and the Journal of Macroeconomics, and is the founding editor of Fusio: The Bentley Undergraduate Research Journal. In addition to his published research, he has authored the study guide to accompany Frederic Mishkin's "Macroeconomics: Policy and Practice" textbook, and the study guide for Mishkin's widely used "The Economics of Money, Banking, and Financial Markets"